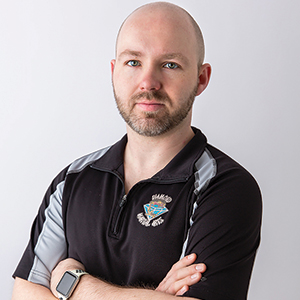 • Manager/Lead Instructor of Diamond Martial Arts
• The Saber Legion – Ontario Charter – Rep & Fighter
• American Kenpo Practitioner circa 1993
• World Kanzen Kenpo Federation Black Belt circa 2000
• A.K.K.I. Member circa 2006, A.K.K.I. Black Belt achieved 2017
• CanfitPro Member
• YogaFit Member
• TSL Member
• World Modern Arnis Alliance Member
Tim Vanden Heuvel is the manager of Diamond Martial Arts. He has been training under the tutelage of Ms. Kelly Allan since 2006 and has been teaching since 2012. Tim began training at 10 years old, earned a 1st degree black belt in the World Kanzen Kenpo Federation at age 17 years of age, and followed it up by attending Conestoga College for Business Administration & Management. In 2006 Tim contacted Ms. Kelly Allan to start training A.K.K.I Kenpo. Tim humbly emptied his cup to start fresh in the innovative and perpetually changing art of Kenpo by joining Diamond Martial Arts and the American Kenpo Karate International Association. From the beginning he has been an integral part of the studio, always helping students in class and helping them prep for their belt testing well before it was time for him start the instructor’s program.
Tim has worked very hard and diligently in his Kenpo training and instructing. Tim achieved his 1st Degree Black Belt before Ms. Kelly Allan and the A.K.K.I Board of Directors in Evanston, Wyoming and is the main instructor of the Kenpo and fitness programs at Diamond Martial Arts. He is also soon to be a 2nd Degree Black Belt in the A.K.K.I. Tim is a proud member of the American Kenpo Karate International Association and loves teaching martial arts and fitness by helping people of all age achieve their goals. Martial arts and fitness are a way of life for Tim - he is always motivating, positive and encouraging to others. Tim has years of experience in managing businesses, and now pours that passion into managing our martial arts studio. We are proud and delighted to have Tim Vanden Heuvel: a family man who loves dad jokes, music, has played in various bands and is proudly the ultimate nerd in music, martial arts and boards games. He is currently working towards earning his personal training certification and fitness yoga certification. Lastly, Tim is also spearheading The Saber Legion – Ontario Charter as the area Rep and a fighter. Uniting people through saber duels - both martial artists and general enthusiasts - will surely help us all grow.